Update on my health.
I went in to see the doctor about aches in my joints that just wouldn't go away.
I know, I know, that is a Celiac thing, but something just felt off.
I have been bruising like crazy and I mean, crazy!!
I counted I think around 18 bruises on both legs at one point. I was just not feeling the greatest.

The doctor did an overall blood test for me and everything turned out fine except my cortisol level.
It is supposed to be lower but it was pretty high. I was told that I needed to check it again in about a month and see how it's going. 1 month later, it had gone up even more.

My doctor didn't even want to test how my adrenal glands were functioning, she knew that if it came back off, that I would have questions. She was right, I did and I was freaking out (still am a bit).
There are so many questions going through my mind right now, what could be causing this?
Could it be the bad sleeping pattern I have put myself & my children in (night shift without actually being on night shift, due to daddy's work schedule?) or is it all the regular health anxiety I have, causing issues?

What ever the case, I will be seeing an endocrinologist sometime this year (hopefully soon) and get an answer as to what is going on with me. The fatigue I experience normally feels like it has tripled and I find myself waiting impatiently for each day to end so I can go back to sleep again.

That is no way to live!
I really pray I get some answers and soon!

Until then, I just wait.

Thought I would just update you guys.
Hope to do some new product reviews soon on here.

-Keep on keeping on.

When it comes to finding treatments for Celiacs disease & creating awareness, we've come A LONG WAY.
I am excited & also nervous to announce that they are making a vaccine for us celiacs.
This will help us in addition to our gluten free diet.

I am personally still on the fence about it's accuracy but according to Dr. Joseph Murray of the Rochester Clinic, he is hopeful.

I do not think this vaccine should be administered and the patient to be allowed to eat gluten again, until this drug is tested for a longer period of time. Only because I have no idea the impact it will have on the body over time. What ever the case, I am happy that they are trying to make it easier on us & give us a drug that will help us in addition to our gluten free diet.

Below you will find a link to a website that has more details about the vaccine & a link to Dr. Murray's video. Feel free to comment below, I would love to hear what you think about this new drug.

Have a wonderful GLUTEN FREE day!

Isn't it incredible how far along we've come?
Like I said in my last post on here, we are blessed to be in this day an age.
I just want to thank the Lord for bringing this to Dr. Gee's attention & helping him make the connection.

Just think, in the early 1800s, people were having issues with Celiacs back then too.
Celiacs has evolved so much during these years, that the common symptoms that go with Celiacs are not always the symptoms patients present now when going to see the doctor.
Like for instance, Doctors thought that you had to be skinny, short, have diarrhea & or failing to grow, to even be considered to have Celiac Disease.
Now days, you can be over weight, constipated & look to be completely healthy.
You just never know, and that is a scary thought.

But once again, due to the fact that we have ways to detect Celiacs Disease easier now,
more and more people are being diagnosed with it.
You just never know with Celiacs Disease to be honest, it can disguise itself as all sorts of diseases.
It's a sneaky, annoying disease.

Posted by Unknown at 6:56 PM No comments: 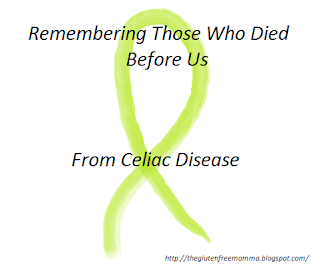 Let's take a moment out of our busy night tonight just to reflect on the fact that so many people lost their lives because of this disease.
Back then, doctors had no idea what was causing these random deaths, they couldn't understand why so many children & adults were suffering from malnutrition while still on a balanced diet. They couldn't figure out why so many children failed to grow right & presented many symptoms. Connecting the dots was just near impossible.
Finally after World War 2, doctors were able to finally see the connection between symptoms & what their patients ate. Children were getting better with the lack of gluten in their diet.

We could have prevented the deaths of so many people if we would have come to this conclusion earlier.

Luckily for you and I, doctors as well as medicine have come a long way. Technology & blood tests can now make it easier for doctors to detect this disease quickly.
We now live in an age where you can typically find a gluten free product on the shelf of most grocery stores.  Decades before, that was not a common occurrence at all.

So once again, I want to dedicate this post to those who lost their lives to this horrible disease.

{Even though we have Celiac Disease, we are blessed}

I wanted to quickly write a post and share with you how you can get a discount on this years Gluten Free Food Allergy Fest in Minneapolis Mn, May 20th-21st.

If you are going to this wonderful event, check out groupon before getting tickets through Gluten Free Food Allergy Fest's website. On there, they want you to pay $15 per person but on groupon you can get a deal {2 people for $15}. That is 50% off.

WHAT A FABULOUS DEAL, FOR AN INCREDIBLE EVENT!

So check out the link below, to go get your ticket now!
If you will be attending this year, make sure & leave me a comment below,
I would love to meet you!


{I will more than likely be going facebook live at the event on my facebook page, so make sure & check it out   The Gluten Free Momma On Facebook}
Posted by Unknown at 8:09 PM No comments:

Join my Celiac Disease Support Group
where you will find some helpful links, information & be able to fellowship with other Celiacs just like you.

What are you waiting for?
CHECK IT OUT

You can also follow my blog page on facebook at The Gluten Free Momma
Posted by Unknown at 1:10 AM No comments:

I will let you in on a little secret of mine

It has been 4 years that I have been completely gluten free and I can tell you with full confidence that it has been quite a journey. It has had it's ups an it's downs. This journey has filled my heart with such joy & also tore it into pieces at the same time. I have laughed & I have cried, but this path that I have taken has allowed me to meet such amazing people. I now have more friends than I ever thought possible, all because of this disease and my willingness to help.

But despite how it may look on the outside, I have been battling a darkness inside of me ever since diagnosis. There is a war going on in my mind and it keeps me up most nights. My thoughts are not my own anymore, they are made up of lies. My mind is negatively creative and knows just what to imagine up, to bring fear into every part of my being. It knows exactly what buttons to press & presses it continually. I am a prisoner of my own mind and I have chained myself to my own fears.
The day I got diagnosed is the day my life completely changed.

My health was always precious to me, even growing up. My brother would get the flu and it would send me into a complete panic. Now I realize that the battle that I am facing on a daily basis is Anxiety & Hypochondria. What used to just be a normal periodic fear, is now in my face 24/7.
You can't really explain this to anyone who hasn't experienced anxiety first hand.
But, for those of you who have experienced this or continue to battle it, you are not alone.
I know it may feel like we have trapped ourselves in a black small corner, but truth be told,
we are far from alone.

Celiacs is not the end of the world, even though it can cause many scary diseases and be the root to a lot of unexplained issues & symptoms, we shouldn't fear it.

I am uncomfortable writing this because it exposes the very thing that has bound me for many years, but I am not ashamed of it anymore and I want others to know, that having anxiety with Celiacs is absolutely normal. It's okay to worry, but it's not okay to let it take over your life.
I am personally at a point in my life where I want my joy back!!

God has allowed us to have Celiacs Disease for a reason. We must look at this disease in a fresh new light.
"How can we serve others who have Celiac Disease?"
"What positive things have come out of this diagnosis?"
"Am I healthier being on a gluten free diet?"

Strength comes when you face your adversity, and what is holding you back and you say,
"You will no longer control me, this is my life and I will live it & enjoy it."

Raise the white flag in your mind and shut this war down!
We can make up imaginary situations/problems but more than likely it really isn't that severe. 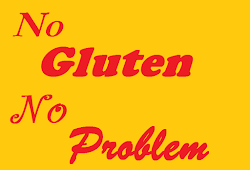